Home / About Us / Our Region

We acknowledge that we are on the traditional lands of the Peramangk and Kaurna people and we recognise their connection with the land.

Long before the arrival of Europeans the Mount Lofty ranges were inhabited by the Peramangk Aboriginal people who managed and preserved the Adelaide Hills, using fire to clear old grasses and promote fresh plant growth. They also covered freshwater rock holes to keep their water supply clean and maintained many walking tracks. The area was rich in vital resources – which are still just as precious today.

The Mediterranean climate of the Adelaide Hills is influenced by cooling air from the Southern Ocean and high altitude gully breezes. Annual rainfall varies between 700 and 850 millimetres. The region has cold wet winters and mild summers with most rain falling in winter and spring. The mean sunshine hours per day are 8.5. Summer (from December until the end of March) is generally warm and dry, with average temperatures considerably cooler than most other Australian wine regions. Significant diurnal temperature variation during grape ripening is a distinguishing feature of this vineyard. Longer sunlight hours and temperate daytime temperatures contribute to intense fruit flavours while the sudden fall in evening temperature preserves natural acidity and structure.

The rocks that form the landscape and soils of The Lane Vineyard are part of the Mount Lofty Ranges remarkable story. The rolling hills you see here today are what are left after 100’s of millions of years of erosion. Centuries of exposure to nature’s forces have left ancient gravelly soils, a demanding, perfect host in achieving outstanding quality of fruit from our vines.

A UNESCO World Heritage bid is in progress to internationally recognize the Adelaide Hills agrarian landscape as being of “outstanding universal value” and quintessentially Australian. 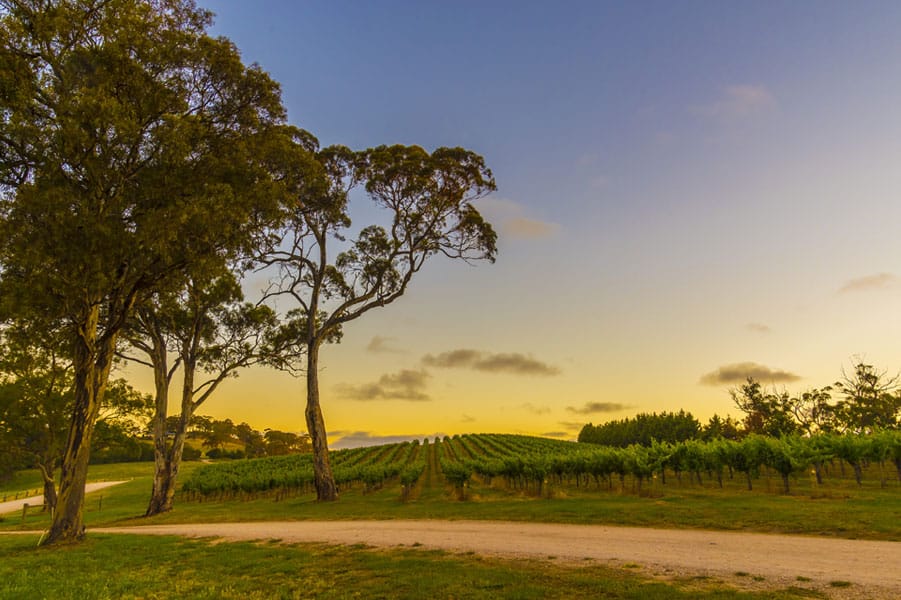